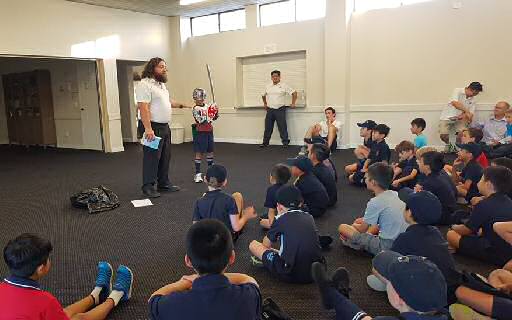 The Boys’ Brigade Company is an integral ministry of the Westminster Presbyterian Church Bull Creek (WPCBC). The Boys and Girls Brigade Companies are the longest standing ministries at WPCBC. BB has partnered with WPCBC for 33 years and GB 32 years.

The Company enjoys a rich history at WPCBC and the support continues to remain strong. Both BB and GB meet at the same time at WPCBC on a Wednesday evening from 5.15pm to 8.30pm. The programs are run separately and with the occasional joint activity once or twice a year.

Some of the helpers and leaders also have a Brigade background with the Company.
Notably, these include, Vinn Wong, Samuel Ong, Claude Bratschi, James Leau and Andrew Powell. Mr Wong and Mr Ong are both Queen’s Badge recipients.

Company highlights
The Company has recorded strong growth in the number of boys across all age groups. Whilst the actual number varies from time to time, the current active number of boys is 67. There are 15 Anchors, 37 Juniors and 15 Seniors. Intake of new boys continue throughout the year.

The leaders of Anchors and Juniors are somewhat overwhelmed by the increase in numbers. It is only through the grace of God that there has been such growth and all credit is given unto Him. The Company is blessed to have a large number of boys from non-Christian families attending each week.

The Company is unapologetically Christian in its approach to Brigades. Every aspect of the activities is linked to the Bible and God’s Word, pointing the boys to God’s Sovereignty and salvation through Jesus.

WPCBC acknowledges the tremendous outreach opportunity the Company has. It has provided the Company with its support with the provision of a ministry apprentice, Mr Powell, to serve as the Anchors and Juniors Chaplain. The Company is blessed to have Mr Powell’s love and dedication to see God’s word spread amongst the boys together with his previous BB experience as a boy himself.

To support the leaders in Anchors and Juniors, the Company’s prayers were answered in the calling of Mr Ong to serve after his service in the Singapore National Service came to an end. Mr Ong’s service within the Company has been well utilised in the short time he has been back. He has served across all three sections to fill gaps in leaders and helpers due to absences.

Praise Points
Both BB and GB companies are thriving at WPCBC. GB has seen the same growth as experienced in BB. It absolutely wonderful to see God at work at WPCBC on a Wednesday night with over 100 boys and girls coming through the doors.