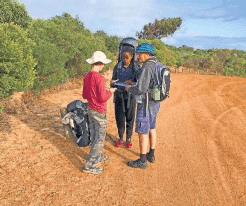 Outgoing captain Nic de Vries said the event was a presentation night for the various awards and badges the youngsters had earned throughout the year.

“As they complete each of the different awards, they earn a badge,” he said.

“If they have already earned the badge and are doing a high level in the same subject, they earn a cloth behind it.”

“The brigade in Geraldton used to meet at the Uniting Church and we moved over to the Anglican church about nine years ago,” he said. Mr de Vries said the Geraldton group had about 34 members aged between five and 17, divided into three groups: Anchors for ages five-seven, Juniors for ages eight-11 and Seniors for ages 12-18.

“Throughout the year they undertake various activities,” he said.

“This year the seniors went on a canoeing expedition to Augusta with caving and abseiling for a week.”

The group meets every Thursday between 6pm and 8pm.